3 Idiots (Hindi: थ्री इडीयट्स) is a 2009 Indian comedy film directed by Rajkumar Hirani, with a screenplay by Abhijat Joshi, and produced by Vidhu Vinod Chopra. It was loosely adapted from the novel Five Point Someone by Chetan Bhagat. 3 Idiots stars Aamir Khan, R. Madhavan, Sharman Joshi, Kareena Kapoor, Omi Vaidya, Parikshit Sahni and Boman Irani. This is a story of two friends who embark on a quest for a lost buddy. On this journey, they encounter a long forgotten bet, a wedding they must crash, and a funeral that goes impossibly out of control. 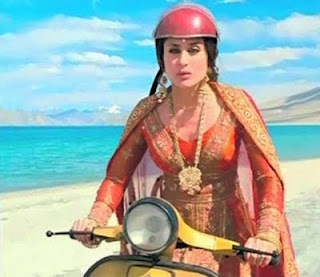 Why I Enjoyed
1. If you are going to watch an Indian film for the first time then you should watch this. 3 Idiots will break your old perception about Bollywood. You may think that song and dance sequences in a film are corny because of how old Philippines movies were. I must say, don't compare the two productions. The dance choreography in Indian films are cuter and the effects adds more color to the scenes.
2. Music was good and well placed with the scenes. The songs used in the movie have deep meaning and fit well to the plot. Also, the movie shows the fantastic natural wonders of India. The aerial shots of Shimla and Ladakh are pleasant treat to the eyes.
3. For me, the actors played their roles very well may it be in the college or the 10 years after that. All of them came out with convincing portrayals. This is definitely one of Aamir Khan's best performances.
4. The story was great. It covers friendship, the drama and fun of college, family matters, and of course romance. Both humorous and emotional scenes are combined in the right proportion. This film offers lots of rib-tickling moments. One memorable funny part is when the frame goes black and white every time Farahn's family is involved in the scene. And of course Chatur's comic episodes in college such as when he imitated James Bond during the freshmen initiation and his memorized crazy speech. The twist is also totally out of the blue and keeps you hooked to the movie. Just when you think this feel-good comic flick is leading to its culmination, there is another surprising element at the climax which is brilliantly weaved out!
5. I was Rancho in my college years and I also had my Farhan and Raju. It's no question why i can relate to this film. Just like Rancho, I didn't care about my grades too but I always wanted to make the best projects. My team of course submitted the best project design. Although unlike Rancho, I didn't top the batch but my life turned out to be Aal Izz very very very Well.
Posted by R Y E at 1:28 AM